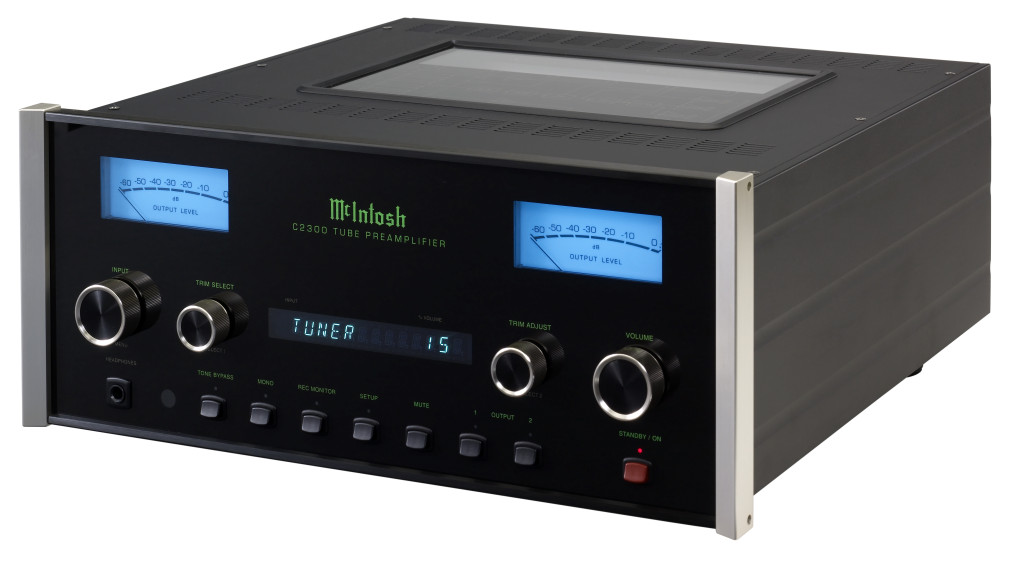 Like too few others, McIntosh isn’t afraid to keep a model in its line-up for more than a season or two. I’ve been using the C2200 pre-amplifier ever since it was launched some six years ago – the longest I’ve ever stuck with a single pre-amp.

Why the loyalty? Simple: in addition to sounding as good as a reference pre-amp should, it’s a joy to use – especially if you have to accommodate a lot of sources, or if you’re always playing around with your system. In my case, as a reviewer, a pre-amp isn’t left alone for long. The C2200 can handle everything except moving-coil cartridges, it offers enough user adjustments to optimise the performance of all sources, and – best of all – it has plenty of single-ended AND balanced inputs and outputs.

But six years is a long time in the world of audio. The new C2300 Vacuum Tube Preamplifier adds a phono section derived from the dearer preamps, and refinements throughout, all of which adhere to a distinct evolutionary path from its predecessor. Therefore, it’s possible for a C2200 user to move over to the C2300 without even opening the owner’s manual.

That, though, would be a mistake because the C2300 is laden with features, and it strikes me as a C2200 that’s been more than merely tweaked and hot-rodded. Least important in terms of function but most certainly a major selling point is the positioning of the six valves in a window across the top, where they’re back-lit with a green glow. This is one pre-amp you will not want to have obscured by the shelf above it.

But valve location aside, this is classic McIntosh all the way. The tubes on top simply denote that it’s classic Mac for the 21st Century. Placed alongside the C2200, you’ll notice slightly different positioning for the meters, and fewer controls (two fewer knobs and one less press-button), the C2300’s rotaries doubling up some of the functions.

As the company describes it, the C2300 “combines a suite of potent engineering enhancements with smart, user-programmable features to deliver a truly extraordinary audio preamplifier. Each input may have the bass, treble, and mono/stereo mode adjusted and stored in memory. When individual inputs are selected, these settings will engage as preset by the listener. All adjustments may be made either from the front panel or remote control.”

That encapsulates its primary concern for user-fine-tuning, the likes of which were the norm back in the 1950s and 1960s, but which we have been denied since the onset of minimalism back in the 1970s. The most noteworthy difference, however, between a cutting-edge pre-amp of, say, 1960, with selectable phono EQ curves, tape sensitivities and the like is the ease of use and precision available to us today. Microprocessors aren’t always evil in an audio context, and neither are remote controls.

That array of 12AX7a vacuum tubes across the top is employed in pairs for three primary sections in the C2300. They include a dedicated pair for the moving-magnet phono section, another dedicated to moving-coil and a third for the high-level preamp section. While the m-m stage in the C2200 was good, it didn’t surpass a handful of outboard phono stages I have access to, including the Audio Research PH5 and the AudioValve Sunilda, so I rarely used it.

By adding a moving-coil stage and making both phono stages fully-adjustable “on the fly,” the LP playback capabilities of the C2300 are of another order entirely. And to be able to change impedance or loading settings while the record is playing? That’s the answer to an audiophile’s prayers. When you’re shopping, and comparing prices, just bear in mind that – unlike too many pre-amps these days – you don’t have to make allowances in your budget for a separate phono amp.

As with the C2200, the C2300 is feature-rich in other areas. There’s a top-grade headphone amplifier with a ¼” headphone jack instead of the C2200’s mini-jack (which was an unnecessary nod to the iPod generation, the sort of people who don’t exactly line up to buy valve pre-amps), eight unbalanced programmable sources of which four can act as balanced inputs, the facility to assign any of 12 names to the sources, and a front panel display that can be customized to indicate only those available sources. Access to all of these is via the Setup Mode pushbutton, which allows the changing of the default settings for Inputs, Levels, Special Functions and the Display parameters.

McIntosh employs digitally-controlled “silent electromagnetic switching” for signal routing. Their precision switch contacts are isolated from environmental contamination (does anyone still smoke?) inside inert gas-filled glass tubes, which means that the C2300 controls should function as new for years to come. This technology combines quietness and low distortion with utter reliability.

For the most-used function of all, the volume control, McIntosh has fitted their VRV (variable rate volume) digitally-controlled output attenuator which offers more than enough precision for most of us: 214 steps of 0.5dB each, with accuracy stated as within 0.1dB. A nice touch is the volume vs. rotation rate varying as the preamplifier’s gain varies.

Continuing in the modern Mac tradition, the C2300 uses the company’s in-house R-Core Power Transformers, it comes with a full-function IR remote control and provides “Pass-Thru Integration” for use in complex custom installations. In terms of flexibility, then, there’s nothing I can think of that McIntosh hasn’t addressed for optimising two-channel music playback, and it will sit side-by side in a more grandiose installation for multi-channel and video playback.

My reference system is two-channel-only, so the C2300 was simply inserted into a set-up that had been optimised around the C2200. The rest of the system included the McIntosh MC2102 valve power amplifier, Sonus faber Cremona Auditor Elipsa speakers and Yter cables. Sources included the Marantz CD12/DA12 and Musical Fidelity KW25 CD players, and the SME 30 turntable with Series V arm and Transfiguration Orpheus moving-coil and Ortofon 2M Blue moving-magnet cartridges. I also used the Audio Research PH5 phono stage for comparison.

It soon emerged that even my beloved PH5 had its limitations. The MC phono section in the C2300 provides plenty of gain – 60dB at 1000Hz – and the user-adjustable impedance settings cover a range from 25 ohms to 1000 ohms in six steps, or two more than the ARC. Its design consists of special ultra-low-noise circuitry a and a double filtered power supply design dedicated to the m-c section, with two of the aforementioned 12AX7A tubes in the second compensation amplifier stage. McIntosh favours high open loop gain, with negative feedback is used around the phono amplifier to further reduce noise and distortion. It’s deliciously quiet, too, so the dynamic range is exceptional. Additionally, the output is buffered by a unity gain amplifier for low output impedance. For the moving-magnet input, a separate pair of 12AX7A tubes has been employed. The user can adjust load capacitance from 50pF to 750pF in 50pF steps.

I had no trouble matching the Transfiguration and the Ortofon precisely to their optimum settings, and used them for primary listening during the test period. However, I also dabbled with some other cartridges, including Londons, Koetsus, a mono Lyra and my cherished Shure V15 V, and the McIntosh emerged the perfect host. It’s no accident that this gem was released the same year that McIntosh launched its first-ever turntable.

For vinyl lovers, then, the C2300 is a showcase product, wide open, quiet and detailed. The attack on percussion transients, for example, were fast, precise and crisp, with both mono and stereo programme material. I used a mint copy of Louis Prima’s The Wildest!, which possesses both sharp drumming and gloriously punchy brass. The horns were clean and suitably metallic, the sax unmistakably rich and throaty.

And hovering above them, were vocals as disparate as one could imagine: Keely Smith vs Louis himself, crystal clarity vs that Italian rasp. The C2300 had no trouble preserving the integrity of every sound, while the detail and soundstage were useful in demonstrating the difference between a good budget m-m cartridge and an expensive, truly high-end m-c. The textures differed enough in quality and authenticity to justify the extra layout. As for the McIntosh, it handled both types of cartridge with equanimity, allowing them to deliver their best.

Consistent regardless of source – and that includes the two CD players – the McIntosh produces a slightly wider soundstage than the C2200, though stage depth and image height were identical. Better separation? Perhaps. Whatever the cause, you could measure it physically, because the sounds clearly emanated beyond the edges of the speakers with both preamps, yet the C2300 offered almost an extra half-meter width overall.

With live recordings from Bob Dylan, the Allman Brothers and Neil Diamond (that old chestnut, Hot August Night on MoFi), this massive soundstage played a key role in ensuring the realism of the experience. While it’s certainly true that the sound can be no larger than the room in which it’s played back, the illusion – and hi-fi is, in must be said, a deft illusion – certainly allows us to distinguish between cramped and open reproduction. The McIntosh delivers air and space, with accurate proportions and, above all, correct scale.

Even with mono recordings, there was a greater sense of body, despite the lack of left-right differentiation. It allows the listener to hear layers, even in mono. But 99 percent of what people play nowadays employs two or more channels, so the remarks about mono are more of an aside for those of you with libraries full of vintage recordings.

On the tonal front, the C2300 favours detail and accuracy over tube-y warmth, but there’s no mistaking that this magnificent machine is all-valve. However clean and authoritative the sound, however silent the background, it possesses precisely the richness and ‘humanity’ that many feel is lacking in the majority of solid-state devices. With the vocals of Julie London, husky and almost indecently sexy, the McIntosh serves as a conduit that robs that voice of none of its characteristic tonal clues.

So near-to-perfect a singer was she that there’s of an less of easily-identifiable character to London’s sound than, say, Peggy Lee’s, but the openness and detail retrieval of the C2300 ensure that you wouldn’t mistake her for another. This applies, too, to a raft of sublime female country singers who seem determined to sound like each other; the C2300 exposes every last trace of individuality, such that – even if you’ve never heard the Judds, Crystal Gayle and a few hundred other Nashville queens – they appear as different as two consecutive vintages of the same wine would to a connoisseur.

Passing on my opinion of the C2300 requires a certain clarification: I’m away that my role as a reviewer prejudices me toward components that are flexible and easy to use. Equally, I realise that normal people don’t change cartridges or cables every few days, and that they do not place as high a value on such matters as would a retailer who has to set up different demos … or a journalist who needs to review a couple of components every month.

Regardless of whether you approach this as a regular hi-fi user, who may leave it in place for many months, or an inveterate tweaker who ‘plays’ with it all the time, the plethora of facilities must not distract us from the most important aspect, which is its sound quality.

In terms of unadulterated performance, using both analogue and digital sources, the C2300 is one of the best four or five pre-amps I’ve used. No, I haven’t had hands-on experience of McIntosh’s C1000 or 2K, and Krell’s Evolution is a mighty thing to behold. But I would certainly put this on my short list if I were shopping for a new pre-amp. And given its price, I would probably buy it just because of the current era of austerity. The C2300 is, simply, superb.