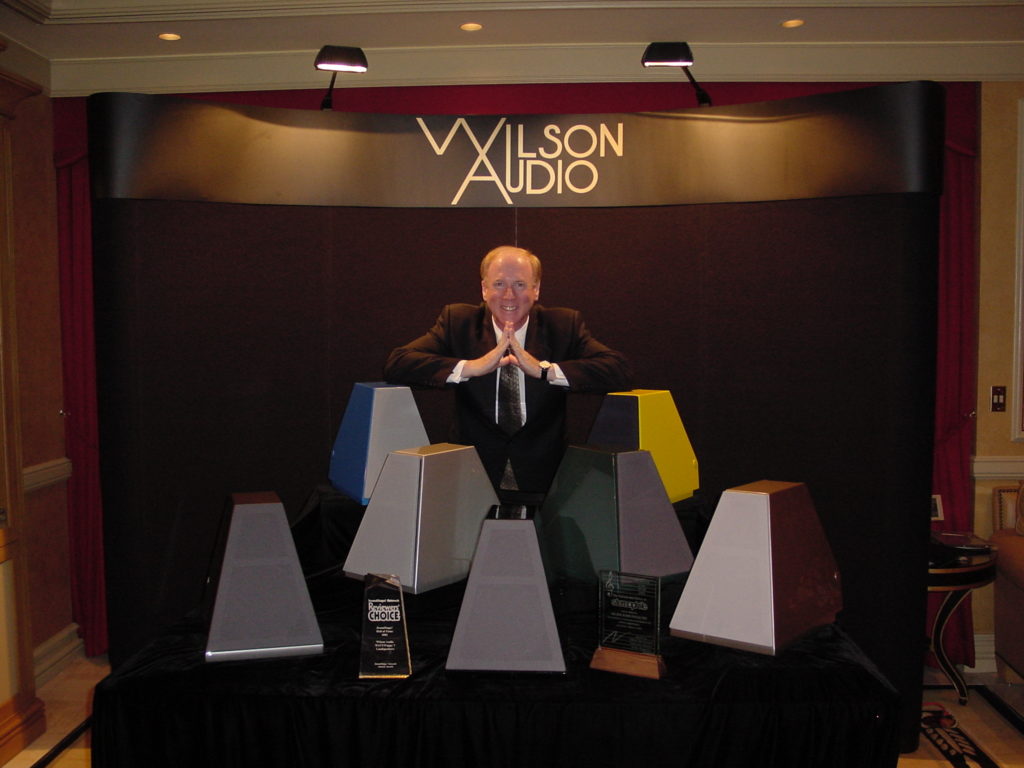 We knew it was coming. In late 2017, it was revealed that Dave Wilson was suffering from a virulent form of cancer. He fought it until May 26, 2018, leaving us after five months of agony, but handled with the grace that defined his life.

‘Grace’ is the first word that springs to mind when I think of Dave, and in every sense of the term – secular and religious, action and thought, comportment and expectation. Of late, he might have preferred ‘authentic,’ which came to signify for him the adjective that best described what he strove for in his loudspeakers: authenticity at every level. And that’s as good a way to describe convincing music reproduction as ‘fidelity’ or any other we have used over the decades.

In the 34 years that I knew Dave and his wife, Sheryl Lee, as well as his family and the crew at Wilson Audio, he proved to be both an inspiring mentor and a genuine friend. I cannot even begin to quantify how he enriched my life. Now he joins the other departed ‘hi-fi rabbis’ who shaped my understanding of sound reproduction, including especially Alastair Robertson-Aikman, Stan Kelly, David Hafler and Jason Bloom. If there’s a hi-fi heaven, I’d love to eavesdrop on their chats.

Dave will be the subject – deservedly – of obituaries throughout the hi-fi press, as well as in the Mormon community, in which he was so active. His story will be told many times, and it is the saga of a music lover who had the will and the ability to turn his passion for music into both a record label and a producer of world-class loudspeakers.

I would like to pay my respects to him by reprinting here the account of our first meeting, in the summer of 1984. As a preamble, I recall that California was in a heat wave, and my dear friend Jan Mancuso had offered to drive me from San Francisco to Novato, preparing me along the way for the encounter. I was teetotal at the time, so alcohol was not going to be an issue, and it was too hot to drink coffee, but I was a two-pack-a-day smoker with a penchant for vulgarity.

Jan warned me: ‘The Wilsons are not judgmental and wouldn’t dream of saying anything. But don’t expect to smoke for a few hours and do not swear.’ As it turned out, I was so enthralled by Dave and Sheryl and so completely astounded by the WAMMs, that I was unconsciously on my best behaviour, having been transported by the music.

What follows first appeared in Hi-Fi News and later in the book, Sound Bytes. At home with Dave Wilson

I did live through it, welcoming the morning sun with glee that I haven’t known since childhood. The next morning meant a visit to the Wilsons, home of the $40,000-plus WAMM loudspeaker, and the sole opposition to the giants I’d heard in Los Angeles. Jan collected me and gave me my first ride over the Golden Gate Bridge, which is actually red, on up to (or was it down into?) Novato. She showed me Marin County, where the most oft-expressed line is ‘It’s only a cold sore’, and on through Grapes of Wrath territory which seemed a million miles away from the quasi-Monte Carlo look of California’s southern half.

The Wilsons are a gracious couple who seem far too normal to want to house a multi-array loudspeaker system straight out of Flash Gordon in the middle of their living room. You go in expecting, say, a pair of small ARs and you walk straight into these massive constructs wearing electrostatic panels, KEF mid-bass drivers, teensy Braun boxes, and – just a bit behind them – towers housing woofers the size of Pirelli P7s.

Dave Wilson tells me that he’s actually sold seven or eight pairs of WAMMs, and he seemed just as surprised as I did, because (like the IRS) they weren’t designed with commercial sales in mind. The Wilsons’ main concern is the record label which bears their name, and they felt the need for a high-resolution system which would reveal all. The rest of the system consists of a modified ReVox open-reel machine, Goldmund arm and turntable, a variety of cartridges and more Krell-power than John Atkinson and Jimmy Hughes can muster between them. The effect is as devastating as that of the Nudell leviathan, but the sound is rather different.

As with the IRS set-up, the music machine in the Wilson home lets everything through. Time was short, and Dave wanted me to ‘understand’ the WAMMs as quickly as possible, so he had some tapes and discs ready for the demonstration. The most telling performances of all were the first he played, two recordings of his wife, singer Sheryl Lee, made with different microphones. Like James Boyk, Dave is a stickler when it comes to microphones, and this little experiment – in addition to bringing home the point that music reproduction starts in front of the performer – demonstrated exactly what a top-flight system can provide in the way of extreme subtleties.

What was just as fascinating were the marked differences between Dave’s speakers and the IRS system. Both did things with soundstage (like telling you where the walls were in the place where the recording was made) that you can only approach with lesser systems. Both offered dynamic range and sheer power worthy of the amplifiers doing the driving. Both systems – though taller than a telephone kiosk – reproduced full-scale images rather than floor-to-ceiling exaggerations. Both managed to ‘disappear’ in spite of their horizon-filling dimensions. But while the IRS offered you the truth, the WAMM grabbed you by the throat and made you listen to it.

It would appear that these two approaches might be conflicting, but I would imagine that they would appeal to different kinds of listener rather than different kinds of music. The IRS lets you talk or go-to the kitchen for a snack; the WAMM says, ‘Don’t move, sucker, I’m playing’. I want both of ’em.

The temperature in Novato was 95° or so, much cooler than the 100–105° I experienced in Los Angeles. Thank goodness for the muggy summer we’ve had; it prepared me for the sauna-like atmosphere of California and I only came close to dying but once or twice. (Los Angeles is air-conditioned; San Francisco isn’t. Dave made sure we came early so the Krells wouldn’t bake us,) The Wilson home was quite a refuge from the Blade Runner depravity of LA, and about six stages cleaner than the hell-hole of a hotel where I left my luggage, so I didn’t really want to head back over the Bridge. Fortunately there was another respite in store in the form of Noel Lee and the Monsters.